Where nerds go when the lights go out. An all purpose forum meant for the usage of my friends.

So this is an idea for an RP I pretty much just came up with. It has a few flaws and if nobody wants to do it that's fine.
As you can probably guess from the name, it is set in space, and most likely "open world" so to speak. Everyone is on a single small vessel, and just kinda run around and do shit. What the people do is based upon what the captain feels like, who is more or less the person we decide will railroad. This person decides what kind of ship this is, (Police, Smuggler, Pirate, ect) and then we embark on adventures. The setting is more or less Star Wars like, with multiple nations, and Fallout weapon ideas. There are no aliens. What I mean by that is no sentients besides humans because that would be a pain in the ass to handle, unless it is part of an adventure and they are a major problem on the planet, but no space age sentients.
Nations:
Keldran Hyrmgenvity: More or less the assholes of the galaxy. They are heavily invested in slaving and military. However it is also an awesome place to live since it has the best security, police brutality is an all time low, and hey, you have people to do your work for you. Have three people in charge, Military Leader, Trade Master Dude, and Law Enforcer Supreme.
Dementhel Alliance: Classic good guys. They are all about freedom and trade and absolutely hate the Hyrmgenvity. They have a council of people that make decisions that are cycled through regularly, and five people that are permanent, but can veto any decision made by the council, but have to give up there position to do it.
Magan: A sea of ships that just kinda wander all over the place. They have no territory so they "sail" around the outskirts and collect resources. They are infamous for having absolutely atrocious law enforcment, and also the biggest and best armed ships known to man. They are led by a single Captain, who picks a First Mate who succeeds him
Erem: The "Hippies". They are more or less an anarchy with a president who doesn't do shit except keep on everyone elses good side. Normally it would be a nest of everything "seedy" however all of these hippies are armed and would not feel too bad about shooting someone who breaks the social code.
Weapons:
When I say that it is Fallout like I mean that there are Laser, Plasma, and Bullets. Lasers fire faster, and Plasma hurts like a bitch, that is about where the similarities end.
Lasers are usually used in small arms and criminal uses because it is less clunky compared to a plasma gun. It will give you nasty burns, but it will not burn you into a pile of ash.
Plasma is used in larger weapons because if it is going to be large might as well make it powerful. You will see plasma small arms but they look a like something Hellboy would use (exaggeration). Plasma hurts like hell, and could burn through a person if they are not wearing body armor or have personal shields (get to those later). Even if using something for protection it will get through on the second or third shot, and then you are toasted inside your own armor. Its drawback is short range (50 ft)
Bullets are used for things that you would not see with plasma or lasers (duh). Mainly, they are used for sniper rifles, shotguns, and exposives (which doesnt really count as bullets but whatever). Lasers leave too clear of a trace for sniper rifles, and plasma has too short of a range. Sulution is use a bullet. Shotguns.... a laser is a precise weapon not a spread that is just a shit idea, and how the fuck would you get plasma to spread pray tell?
Explosives are weapons used on ships. It is not really to blow the ship up, more make a big ass hole in the side so that everyone inside explodes, suffocates, freezes, or dies in some other way of nastiness. Guns on ships have a lock so that you cannot fire without a garented hit since an object in motion stays in motion unless affected by an outside force. So ship battles are short, and people like boarding more so that they can actually loot things.
Personal Shields: Pretty much everyone with a gun and a brain has one. Or at least gets shot at frequently. A portable shield places a hex-like wall of energy around you that is kinda a one way barrier for projectiles. However, if one of the hexes gets hit, it will disappear until the portable shield gets the energy to replace it, which grows exponentially with each shot it takes. 1 shot would take about ten seconds to recharge, which sucks if someone is shooting at you rapid fire.

I will probably add more to this later, if anyone has any questions ask me, and if you guys are up for this that would be awesome and I can put up a character sheet. 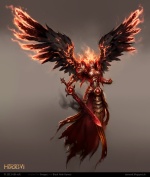 Organizations:
Throughout the solar galaxy there are wide spanning organizations. There are also just general groups that I'm going to put in here from lack of classification.
Cyber-Corp: The largest company in the galaxy and it sells only to the Hyrmgenvity. The Cyber-Corperation manufactures and sells all sorts of cybernetic enhancements as well as being the general hospital within Keldran Territiory. Despite being part of the Hymgenvity, they have been known for hiring smugglers to get materials from other empires. Often times the smugglers are paid well, but in the case that they are caught, the Corp cuts all affiliations.
Star Net: The name and owners of the "internet". They are the only group of people that remains neutral across all powers in spite of war. They also produce small civilian ships with their copious amounts of money, but often times people look elsewhere, and Star Net finds something else to waste their credits on
Sol Engines: The main ship builders. Sol Engines create everything from single person civilian ships to Thantos Class battleships. They would replace Cyber-Corp as the largest company in the galaxy except that pirates tend to target Sol Engines for scrap parts and for the ships themselves. As well as the fact that ships are expensive as all hell, so only the rich can buy them, or people get extremely lucky and win a contest or something
J.A.A.C.K.S.: Just About Anything Can Kill Something. It's in the name. Weapons dealers. They are positively the sleaziest people alive, constantly hiring pirates, smugglers, spies, sabatours, anything to exploit possible profit, or just cause mayhem for their competitors. Jaacks focus on energy weapons, but bullets are no strangers to them, and they provide the explosives for most star conflicts.
Pirates: Pirates sit at the waypoints in travel and board vessals most times. As it takes about an hour to recharge engines after a jump (less if you have a 1 person ship, more if you have a warship), the pirates have plenty of time to secure a line, and the victims can either suffer a hull breach, or fight the pirates. Sometimes Pirates are little more than mercenaries hired to target specific companies, but often times they attack more than just their target.
Smugglers: Smugglers live off the Keldran Hyrmgenvity. Just about all drugs, weapons, and quite a few luxuries are banned in that large section of the galaxy. Because of this, smugglers either live long and prosperous lives, or die very shortly in their career.
"The difference between a smuggler and a pirate is that if you are a well known smuggler, you're doing a very poor job."

Currently the Keldran Hyrmgenvity is in a long drawn out war with the Delmenthel Alliance. The war has gone on for 6 solar sweeps and shows no sign of stopping, as both sides have lost wide swaths of territory all over, and want it back before them make peace. The Hyrmgenvity shows supperiorty on the ground due to their advanced cybernetics and guns, while the Delmenthel Alliance has superior naval capabilities due to the gigantic swarms of ships and improved targeting computers. The Magan show support of the Hyrmgenvity (despite their reputation) although they have not taken an active part of the war, and only hit the occasional outer rim Alliance colony if they pass by, jamming signals to ensure no word makes it back. The Erem are taking no part in the war and intend to stay that way.

Name: (Of Character)
Cybernetics: (If any)
Gender:
Affiliations: (If any)
Personality:
Looks:
Equipment: (Weapon type, tools for simple tasks. No characters that are tech medics with a phd in law who served as snipers in the spec ops units of both sides)
Ship: (If captain)
History: (If you feel like it. You can always make it up as you go along)