Where nerds go when the lights go out. An all purpose forum meant for the usage of my friends.

Acceccories: Kiki: around her neck, Kiki has a necklace with a silver heart key charm with clear gems embedded in them
Vivian: Around her neck, Vivian has a black lacy ribbon choker with a white moonstone with a slash of purple in the center

Kiki fell into a bat of radioactive liquid when she was a small kit, so that would explain the streaks in her fur. Also, like the Hulk, when she get really, really angry, she switches personalities. (like Jekyll ad Hyde.) So, her "Jekyll" is Kiki, the fun, kind, aloof one. And her "Hyde" is Vivian, the mean, manipulative, seductive one. And when her personalities change, so does her appearance. (See the section "appearance")

Accessories: her style is pastel punk/ hardcore Gothic/ pastel hipster, has three earring hole in her ears (usually wears one or two), a pirate costume, various sunglasses and her boytoy/halftime boyfriens, kai ( who is a velocaraptor) 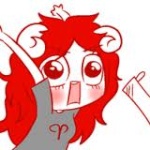